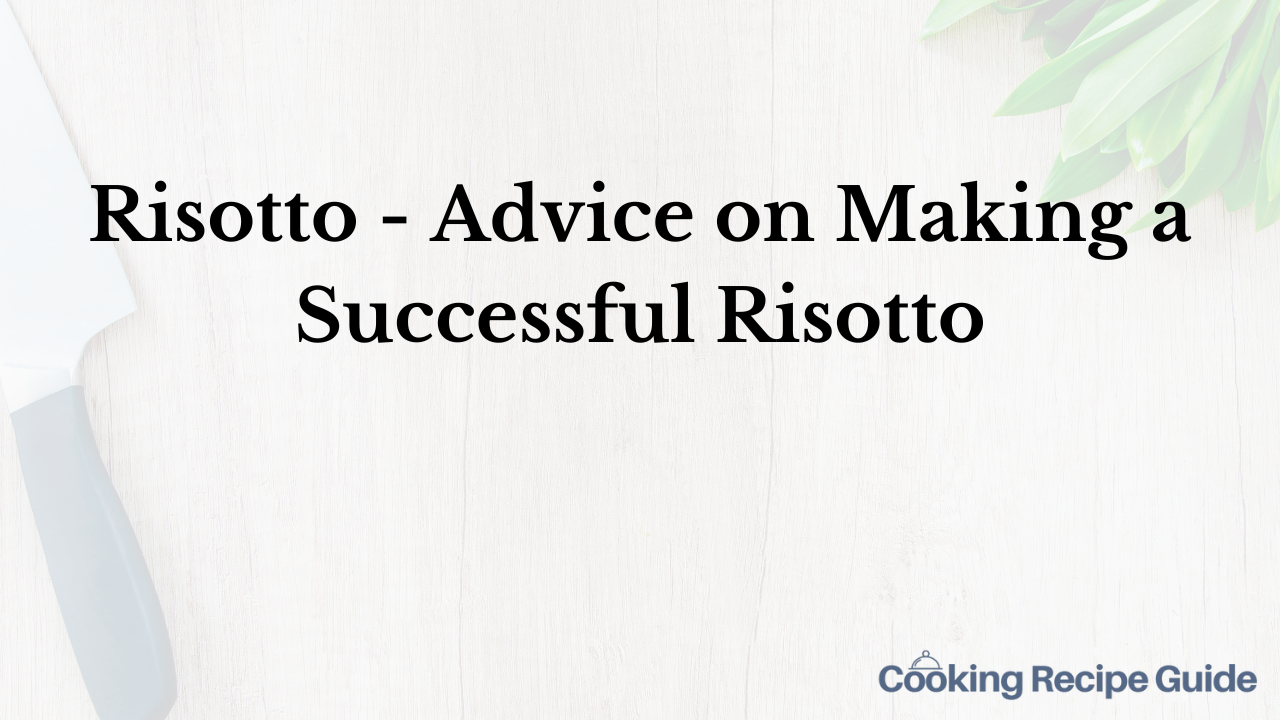 The cultivation of rice appears to have been introduced into Italy in the fourteenth century, mainly in the Milan area, where it was a means of exploiting the marshlands.

Today, Italy is the principal European producer of rice, and exports varieties intended for making risotto worldwide. Appear-ing in recipe books dating back to the sixteenth century, risotto became established during the seventeenth century, particularly saffron risotto, always with reference to an original recipe from the North of Italy.

Advice on Making a Successful Risotto

Choose a heavy-bottom pan as it will be a good conductor of heat. The ideal is copper-stainless steel or plain stainless steel. The pan should not be too deep or too wide and should hold the finished risotto without it overflowing (beware, rice increases its volume two and a half times during cooking).

In Italy there are pans designed exclusively for cooking risotto: they have a single handle and a very rounded bottom (see pp. 92-93 and p. 169).

The rice is cooked uncovered, except when resting at the end of the cooking time.

The choice of rice depends on the length of time the grains can withstand high heat and steam while cooking without falling apart, and on its starch content, the binding agent which gives risotto its creamy character.

Several varieties of rice grown in Italy meet these criteria; they have large grains and a high starch content. These “japonica” varieties are known by the following names: carnaroli (grown primarily in Piedmont), nano vialone (Veneto), and arborio (Po valley). Risotto rice should never be rinsed, as this would remove all the starch.

This step allows the surface of the rice grains to withstand the cooking process better and to release their starch in order to bind with the other ingredients.

The choice of cooking fat (butter, olive oil, or other) is always a matter of debate in Italy. Being a northern Italian dish, rice is more likely to have been cooked in butter originally. Ideally your choice should complement your risotto’s additional ingredients, and may also be guided by your dietary requirements.

Once the fat has melted, and before adding the rice, chopped or sliced vegetables are usually browned in the bottom of the pan. This process is called soffritto.

Traditionally the vegetables selected are onion, carrot, and celery, chopped together, or onion, shallot, leek, garlic, and parsley. The soffritto base should be chosen to complement the other risotto ingredients.

Once the toasting is completed, the pan is deglazed with alcohol. This will help to dilute the residual juices and give acidity to the finished dish. You can use white or red wine or another alcohol, or vinegar, depending on the risotto’s ingredients.

Once the alcohol has completely evaporated, the stock is added, allowing the real cooking of the risotto to begin. This step is also open to debate: some people add all the stock at once and never stir, others add a little at a time, stirring frequently. These different methods influence the final result. The perfect risotto varies from one region to another, just like the methods for making it, The following is a reliable method: begin by adding 1 or 2 ladles of stock without completely covering the rice. Only add more (1 ladle at a time) when the first addition has almost entirely evaporated.

The choice of stock is also of fundamental importance, since it will permeate the rice with its flavor. A stock made from vegetables, poultry, beef, fish, or shellfish can be used. Some people even opt for a stock of salted water. It can also be worth preparing stock from the trimmings of the ingredients used in the recipe, for example a stock made with asparagus stalks for asparagus risotto, or with the bones from filleting the fish for a fish risotto. The important thing is to consider well in advance what will complement the other ingredients. The use of stock cubes is strictly prohibited when making risotto, unless you want a “stockcube” risotto!

As a general rule for cooking risotto, use twice the volume of liquid to the initial volume of rice. However, this rule can vary depending on the cooking method, the temperature, the amount of stirring, the quality of rice, and the nature of the other ingredients.

Always use hot stock, keeping it simmering in a separate pan throughout the cooking time, and also during the meal, for moistening the risotto again for second helpings.

The cooking time varies depending on the rice chosen (see the packet instructions) and the method of cooking. In general 16 to 18 minutes will be the maximum cooking time.

The creaminess of the finished risotto also varies, depending on the techniques used. The more it is stirred, the more the rice will release its starch. Make sure, however, that you do not break the grains of rice by stirring too vigorously at this stage.

Cooking over low heat allows you to stir less often; the grains of rice will be nicely al dente and well separated, but the risotto will be less creamy. If cooking over higher heat, you will need to stir more frequently and the result will be thick and creamy, but the grains may be broken and less well separated. The success of a risotto is a question of balance.

The cooking time of each ingredient depends on when they are added to the rice. Stir in the ingredients that take longest to cook (pumpkin, artichokes, meat, etc.) at the beginning of the cooking process. Those that cook more rapidly (for example, leaf vegetables) or very fast (langoustines, scallops, etc.) should be added midway or toward the end. Ingredients that take a long time to cook may also require precooking. Some ingredients can also be cooked separately and added just before serving.

Whether the ingredients are cut into small or large pieces depends on whether you want them to be integral with the rice or the dominant feature of the recipe.

The mantecatura is the final stage of preparing risotto and gives it its typical character.

Once the rice is cooked, check the seasoning, and allow the remaining liquid to evaporate. Remove from the heat. Add the butter and stir it in gently.

Add the grated Parmesan or other cheese and mix briefly, making sure you do not break the rice grains, which will by now be very fragile. Traditionally, a slotted spoon is used, as this makes less impact on the grains of rice.

In some regions of Italy, they prefer to serve a more fluid risotto known as all’onda (literally “wavy”). In this case, the butter and cheese will need adding before the rice has absorbed all the liquid. As a general rule, when the mantecatura is completed, the rice should be slightly more liquid than you want to serve it, then left covered to rest for 2 minutes.

As the saying goes: “Risotto never waits for the guest, it is the guest who waits for the risotto,” which neatly sums it up, because it is a dish that cannot be prepared in advance. Once it has rested for 2 minutes, the risotto should be served immediately, otherwise it will cease to be creamy very quickly and become a compact mass.

It is possible to offer a second helping (though it will never be as good as the first) by adding a little hot stock to the remaining risotto and mixing it in gently.

To achieve the best results, do not attempt to make risotto in large quantities (no more than eight portions at the same time). A restaurant that serves a good risotto is easily recognized: it will state on the menu that, if ordering the risotto, you must expect a wait of around 20 minutes.

To speed up the process, it is possible to prepare all the ingredients in advance, ready to begin cooking the risotto shortly before you wish to serve it.